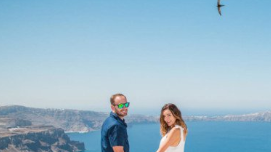 Which is the most interesting place in the world to travel? It is difficult to say in one sentence. It is said that the world is getting smaller because of the internet. Yet the importance of travel has not diminished. And there are so many wonderful places all over the world that you would never think of them as pictures. Like a background in an unearthly story. Today we have come up with pictures of 20 such beautiful places quoting Ezine.com.

According to scientists, millions of years ago, a volcanic eruption in the Aegean Sea created a circular island. In the evolution of time, it was named Santrini after Saint Irini. Yes, we are talking about the Greek island of Santorini. Santorini is one of the most beautiful islands in Greece. It is a small island in the Aegean Sea, about 200 km south of the mainland. Santorini is characterized by volcanic eruptions. The island is famous to tourists for its architectural beauty. Houses have been built on the steep slopes of the island. Santarini is an interesting place for travelers. April to September of the year is the ideal time to travel to Santorini.

The Capilan Suspension Bridge is located in the middle of a lush forest in the Canadian province of British Columbia. The bridge was built in 189. The location of the bridge over the Kapilan River in North Vancouver, British Columbia. This magnificent 140 meter long bridge hangs at a height of 60 meters from the river. At least once in a lifetime, travelers will want to visit the Capilan Suspension Bridge. However, it is very scary to cross the bridge on foot.

This beautiful waterfall is located on the border of Zimbabwe and at the mouth of the Zimbaji River. It is 108 meters high and 1,703 meters wide. About 935 cubic meters of water falls from this waterfall every second. It produces hazy fog up to a distance of about 20 km. It is called ‘Moji-wa-Tunia’ in the local language as it makes a loud noise when the water is falling. It means ‘lightning smoke’. Water vapor clouds form when water falls from Victoria Falls, which floats at an altitude of about 400 meters and can be seen from a distance of about 50 kilometers. One of the most interesting scenes of this impeccably beautiful natural landscape is the creation of a rainbow by the light of the water vapor here. This rainbow can be seen not only during the day, but also on the night of the full moon. David Livingstone, a British explorer, saw the waterfall in 1855 and named it after Queen Victoria. Victoria Falls is one of the natural wonders of the world.

Venice, one of the best tourist cities in Italy, is a dream city for tourists. Every day countless tourists from different countries of the world come to see this floating city. As a result, Venice is another source of income for the Italian government. Venice is located in the northeastern Veneto area. It was once the capital of the republic and Venice, known as the ‘Pacific or Ruler’. Its height is two meters seven feet. The amount of water is much more than the land. So the beauty of Venice is just by water. The population of Venice is six lakh 36 thousand 244. Two crore tourists visit the country every year. The city has about 116 islands.

Rome is one of the most famous cities in the world. The history of this city, the capital of Italy, is thousands of years old. Rome is said to be the center of Western civilization. The city was discovered in 653 BC. Rome is an ancient city of the Paleolithic age. Rome is a unique pilgrimage site for European history, heritage and art and culture. In ancient times small settlements developed here, which the civilized Greeks called Italy. Italy is a city of Roman civilization with a mixture of ancient Greek and Roman cultures. Relatives, friends or family can be lost for some time in this ancient city. Rome is one of the most visited places in the world for travelers.

A large underwater sinkhole, the Great Blue-Hole Lighthouse is located near the reef center. It is a special diving destination, 408 feet deep and 964 feet wide. If you love to dive in the water, this is the real place for you. Due to its beauty it is now on the list of the most beautiful places in the world. Because in a 2012 Discovery Channel study, the Great Blue-Hole topped the list of the 10 Most Amazing Places in the World. Although it is not a cheap experience, it requires a good size. It is located in Belize, Central America.

Spending some time on the beach can be fascinating, but if it is an extraordinary beach then it will be more memorable and wonderful. And this is China’s Red Beach. It is located in Doa, an area of ​​30 km southwest of Panjin. When you see this beach, you will think its water is red. But the water is not really red. The water turns red after reading a type of algae called suida. There are more than 399 wild animals and 260 species of birds. Red Beach attracts a lot of tourists throughout the year. Anyone can come out with a budget if they want.

. The Great Wall of China

Who doesn’t know about the Great Wall of China? It is located in China, the most populous country in the world. It is one of the Seven Wonders of the World. This amazing and longest wall in the world is about 2695 km in length and 4.58 to 9.2 m in height or about 15 to 30 feet. About 9.75 meters wide or 32 feet wide. It is said that 12 pairs of horses can ride together on the Great Wall of China. This Great Wall of China is one of the largest man-made monuments in the world. Before the birth of Christ, the emperors of China started building it to survive the invasion of Mars in the north. The most significant walls were built in 220-207 BC. The 750 km long wall stretches from Dandong in the east to Lop Lake in the west.

Potala Palace in Tibet, known as the residence of the Dalai Lama and the tallest palace in the world. It took 50 years to build the 1300-story palace, which is 3800 meters high. In addition, it has one thousand rooms. Potala Palace can be one of the ideal places for travelers.

This area, which is about six thousand kilometers wide, is the valley formed by the largest crack in the world. The area stretches from Red Sea to Lake Malawi and is 75 km wide. The valley stretches from Syria in southwestern Asia to Mozambique in southeastern Africa. The valley is 6,000 kilometers long (3,600 miles) from north to south.

A royal tomb located in Agra, India. The Mughal emperor Shah Jahan built the magnificent monument in memory of his wife Arjumand Banu Begum, known as Mumtaz. Construction of the monument began in 1832, and was completed around 1848. The Taj Mahal has attracted many tourists since its construction. Currently, the Taj Mahal is visited by two to three million tourists, of which two lakh are foreigners, making it the most popular tourist destination in India. Most tourists visit during the cold season on October 6, November and February.

Who doesn’t like the beach. It is difficult to find people who are not attracted to the vast blue sea and the vast waves that crash into the vast beach. The same picture of almost all beaches in the world. The glistening white sandy beach landed in the waves of the sea. But there is a strange beach in Macquarie State Park near Fort Bragg, California. It no longer matches all beaches. Not sand but shiny pieces of glass here. The name of this beach is Glass Beach. Samudrabilas can be done on all beaches. But if you go to this beach known as Glass Beach, tourists will be amazed to see the transparent stones of different colors. Here the reflection of the light shining on the colored stones reflects the light of the sky, creating a heavenly scene. It is appropriate to call this beach full of pieces of glass ‘glass beach’.

The world’s most inaccessible continent is Antarctica. Located at the South Pole of the Earth. The area is about one crore 40 lakh square kilometers. About 98% of this huge area is covered with 1.9 km thick ice on an average. Antarctica was named the coldest place on earth on July 21, 1983. At that time the temperature was minus 69.2 degrees Celsius. About 90 percent of the world’s ice is stored on this continent. The highest peak here is Mount Vinson, which is about 18,050 feet high. There are also volcanoes. Despite the extreme weather, the organism survives in Antarctica. About 1,150 species of fungi, 600 species of algae, 100 species of moss, 25 species of liverwort and only 3 species of flowering plants can be seen here. Bacteria were found about 2,800 feet below the ice. Several species of penguins are found in Antarctica. There are also petrol and albatross birds. Also seen off the coast of Antarctica are blue whales, killer whales, Colossal squid, seals and other species of marine animals. There is also Eskimora, a permanent resident. The migration of these creatures in the lap of ice has made Antarctica wonderful.

Which is the most interesting place in the world to travel? It is difficult to say in one sentence. It is said that the world is getting smaller because of the internet. Yet the importance of travel has not diminished. And there are so many wonderful places all over the world that you would…

Which is the most interesting place in the world to travel? It is difficult to say in one sentence. It is said that the world is getting smaller because of the internet. Yet the importance of travel has not diminished. And there are so many wonderful places all over the world that you would…

Visit all the world famous museums at home